When You Come to a Fork in the Road, Take It

It really is very interesting living in the UK right now. We often wonder what the headline writers would have had to feed off had Hilary Clinton become POTUS in 2017 and the referendum vote fallen on the side of “Remain”. Of course not everyone likes the uncertainty this has given rise to and it rather recalls the Chinese curse: “May you live in interesting times”. Thank you; we do!

Today’s headline screeching out from the Bank of England: “No deal Brexit could leave pound at record low.” Cue an eye-roll and a “no sh*t Sherlock” reaction from the money markets. As usual there is no detail because the range of variables is so wide, and what is currently inadequately accounted for in addition are the downward pressures on rates in the US and likely pressure on the Euro as the combined economies of the EU bloc grind to a seeming halt.

What most seasoned investors learn is that markets have a habit of discounting all the available information. This is how such aphorisms as “sell on the news” arise. If a market is expecting something to happen prices will have been adjusting ever since the suggestion of that thing happening first arose. You don’t want to be at the back of the queue.

These matters are of consequence not only to existing investors in fine wine, where the secondary market is denominated in Sterling, but to foreign investors looking at coming in for the first time. At Amphora we spend a lot of time in Asia and the Far East so the question crops up with great regularity, and it is important to have a view.

So are those keen to give Sterling a bashing at the front of the queue, or at the back? It is always difficult gauging what the relationship between the currencies of two entities (usually countries) representing a single economy should be, so where do you start when a currency (the Euro) represents 28 as disparate as those of the EU?

Let’s look at the relationship between the pound and the US dollar over a longer term. 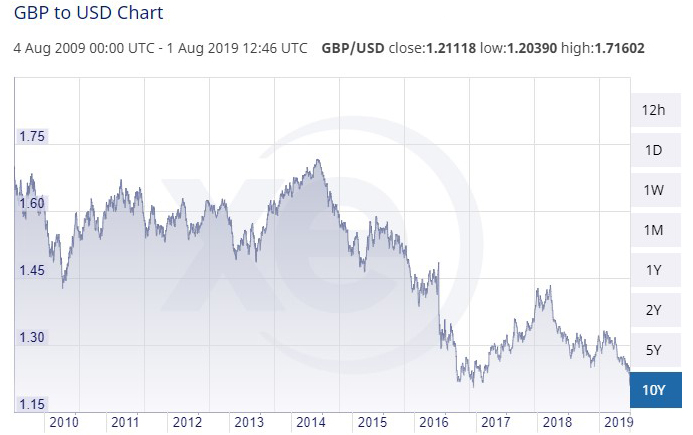 The question we are trying to fathom an answer to is not just where the bottom might be, because this is unanswerable at this juncture. Simply put, if signs emerge of a deal with the EU we would have a rebound, without question. Equally, the longer the impasse, the more the drift down. In addition, since no-one has much of a clue about the impact on the UK economy of a no-deal exit, how can anyone forecast how far Sterling might fall?

The question therefore becomes one of likelihood. Clearly potential investors as we have said many times can sit and wait, but not everyone wants to do that. Many people acknowledge that their investment in fine wine is a medium to long term issue, and for such people the key question is this: where might the currency be in 5 years’ time? This brings us back to the degree by which events are discounted ahead.

As far as we at Amphora are concerned the balance of probability is that Sterling is stronger 3 years from now, having possibly softened further between now and October 31st. We are actually of the view that the UK exits with a deal, in which case the pound will be much stronger, and people are missing an opportunity by not entering the market at this juncture. Our conviction can’t for obvious reasons be that strong, however, so best not mortgage the farm and put it all into fine wine!

The sensible course for new participants is to break up the amount you think you want to invest into segments, which can be pledged over time as circumstances evolve. This is the low risk approach, akin to making regular investments into a pension or investment plan over time, because you can’t know where the bottom is but believe that in general terms the market is headed higher.

We talk a lot about the ability to moderate risk when investing in fine wine, and here is another example: the higher-risk approach would be to make the whole investment now! This is not as lunatic as it might seem, because the market becomes more attractive to a foreign investor exactly as Sterling weakens.

We have observed recently that Indian investors in particular seem to share our view, as they are investing in droves. Their view seems to be, yes – wine seems to be a good investment per se, but with the added currency bet it’s a no-brainer.

In turn, this brings us round to where the market, particularly for First Growth Bordeaux, is right now.

Decidedly attractive, is the answer! This is the Liv-ex 50 which has been responding in our opinion to the fact that it hit a natural low, rather than to Sterling weakness. We pointed out in recent articles that fine wine prices don’t move in lock step with the currency markets, although they clearly impact over time.

A purchase of, say, Lafite 2009 right now is sensible because it is very cheap in algorithmic terms, because for foreign buyers the pound is at its cheapest for 10 years, because there are signs of the market-place bouncing off its recent lows. Against that you have Brexit, which recalling that singular Chinese character,危機, pronounced “weiji”, meaning “crisis” is composed of characters referencing danger, and opportunity. If the majority of our new investors entering the market for the first time over the last 6 months are anything to go by, a huge opportunity is what they are finding amid the scary headlines of the current “crisis”.