What would Monty do?

One of the complaints we hear from a lot of fine wine investors arriving at Amphora’s door for the first time is that they are always told what to buy but never told when to sell. We are sympathetic both to the investor’s position and, you may be surprised to learn, to that of whoever the investor bought from. With qualifications.

Any self-respecting investment advisor has key obligations, and one of them most definitely is to make the recommendation to sell, when appropriate. One of Amphora’s loudest proclamations concerns the secondary market: if you can’t sell it (whatever it is), it doesn’t qualify as an investment. By definition therefore we understand this requirement.

The problem is that whilst there are less scrupulous operators in this market place whose only interest is in selling to “investors” more and more wine, we all understand that fine wine investment is a medium to long term activity, so it rather places the onus on the investors themselves to establish not only that their counterparty will be around for the long term, but will also tell them when to sell.

There are plenty of market participants through whom you can buy, merchants for example, who make no pretension of having any interest at all in what happens to you or the wine subsequent to the first transaction. You can’t go back to such people and moan about their not having told you to sell. We do have sympathy with merchants like this because advice to sell is not part of their offer.

So the question is, how do we know when it is time to sell. The answer to this comes in many forms, as we shall now try to illustrate, and sometimes it is not so simple to get absolutely right. It is easier in mainstream investment where there is greater volatility and liquidity to the extent that you can impose disciplines like stop loss levels, which can alternately guide you to sell once a certain percentage gain has been achieved. Thus it becomes mechanical.

Other investors eschew this approach because it is a bit like a tall poppy syndrome where nothing is ever allowed to reach its full potential, but how do you know when a poppy gets too tall for its own good? In our view there are two answers to this, an emotional one and an analytical one.

Back in 2011 if you had owned a Bordeaux wine for two or three years your returns were such that the temptation to sell ought to have been extreme. If an investment doubles then trebles you have to ask yourself what you were expecting the investment to achieve, then tell yourself not to worry what you are leaving behind on sale. What you cannot do is to shut your eyes and hope that prices will keep on going up forever.

To this extent fine wine investment is very different from investing in a business. If you are lucky enough to invest in a business at its inception and it takes off the sky can indeed be the limit in terms of your return if the company continues to grow from a small base, and rewards investors by becoming cash generative and pays that cash back to investors as it grows.

But wine is a drink. It throws off no cash and pays out no dividends. Its price movement is conditioned by one thing only: the numerical relationship between buyers and sellers. That relationship is in turn influenced by a variety of factors which it is Amphora’s business to understand and try to explain to investors, but ultimately there will come a point when buyers no longer outnumber sellers.

Obviously we use our proprietary algorithm to help inform decisions as to the timing of purchases and sales, but these take little account of an individual investor’s risk appetite, which can sit anywhere on the spectrum, and the point at which different investors enter the market. It is perfectly possible to have a willing buyer and willing seller of the same wine at the same time with neither being right or wrong, simply because of the difference in their relative circumstances, and timing.

In truth it is customarily quite difficult to find wines which are egregiously expensive enough to merit a big “sell” signal, and in practice we will most often recommend a sell once a wine has satisfied the pre-agreed ambitions of the investor. What all investors really ought to remember is that they  have (or should have) a direct line to their adviser which they should use to assure themselves that their ambitions are still being taken care of, and that their instructions adhered to.

It being Chelsea Flower Show we should be ending this week’s note with “a few jobs for you to be getting on with this weekend”, but instead we will leave you with a few wines for you to consider selling.

We have been great supporters of Dominus and very much remain on that tack. That said, Amphora clients have made very good money out of the 2010 vintage which has now become quite stretched, especially against the 2015. Parker awards both 100 points but the 2015 vintage scores slightly better overall (97 vs 95) and with the 2015 offered at £3,000 and the 2015 at just over £2,500 we believe investors should consider the switch. 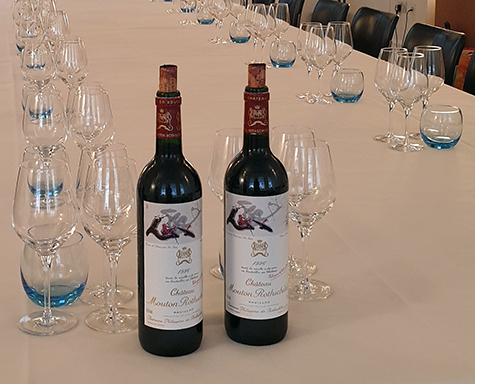 Owners of Mouton 2007 and Beychevelle 2007 should also be looking at their options. These wines have done very well over the last few years and are now very expensive on a relative basis. There is much better value elsewhere and we now recommend selling into the current strength.

Pursuant to the Chelsea Flower Show reference it is interesting to note that the judges adopt a similar approach to that used by most wine critics. Essentially they score against a matrix of variables thereby removing the subjectivity, although as with a wine critic the judges are free to opine as to whether a garden is to their own personal taste or not, irrespective of the result.

Anyone wanting a practical demonstration of this might consider coming along to one of the free Amphora “Can You Tell The Difference” blind tastings. Do let us know should this be of interest as they take place on a regular basis. www.apm.wine/rsvp