What fresh lunacy is this?

Five years or so ago the official autobiography of hell-raiser Oliver Reed was published under the above title, and every year at this time it strikes us as an appropriate comment on the pricing fine wine producers think appropriate for their en primeur releases. It is almost as if a cloud of hallucinogenic composition alights on Bordeaux to make the Chateaux think they’ve just produced a miracle.

Take Montrose, released this week. The critics all believe it inferior to the 2016, which as we know is acknowledged as the superior vintage in general. That is not to say it is not a fabulous wine, because it is widely considered as such, and this seems to be the problem. The producers don’t seem to qualify beyond good and very good, whereas the critics have built an industry around refinements to these grades.

If you are a property developer and you build a lovely house, you then want to sell it. You look around at the houses nearby, and price accordingly. What you do not do, unless you want to go bust, is dig your heels in waiting for the market to catch up with whatever price you happen to think it is worth.

Why, then, would anyone in their right mind pay £1,560 for an en primeur 2018 Montrose when they can buy the 99 point 2016 for £1,550? Even the free-scoring James Suckling doesn’t think it a 99 pointer. And Montrose isn’t the most egregious example; simply the most egregious this week. Stay tuned though because the First Growths are yet to come.

At Amphora we have spent many hours discussing not just en primeur pricing but the whole process of releasing new wines onto the market. Aside from weird pricing there seem to be too many middlemen all taking their cut, and whilst we fully understand the history and can see how we have arrived at this point, we wonder when commercial reality will take hold. We understand the negociants have been spending a lot of time in Asia in recent months trying to establish direct contact with buyers, which will slim down the distribution chain somewhat, so that seems to be a step forward.

What the focus on en primeur pricing does, though, is highlight the value in back vintages. Pursuing the property analogy a bit further, the homebuyer doesn’t really care whether the landowner or developer goes bust, and would more often than not be happy with last year’s model at the current market rate than shelling out a premium for something new, (especially if it comes at a ground-breakingly high level). Amphora not only facilitates that process, but also unearths even better value elsewhere in the market.

This brings us nicely on to Ducru Beaucaillou. 2014 was a very good year in St Julien, with an overall vintage score of 93. To put this into perspective, an amazing year will score 97 or 98, whilst an off vintage will score up to the low 90s, so 93 is at the top end for an off vintage. 2011, 2012 and 2013, all off vintages, score 88, 92 and 81 respectively, but remember you can still get very good wines in “off” years. More pertinently, some of the best investments are from off vintage years.

From an investment perspective we are looking for wines which are trading at the wrong price, wines which trade alongside others which are perhaps nowhere near as good. In its submission about the Ducru 2018 the Liv-ex analysis produced this very helpful graph: 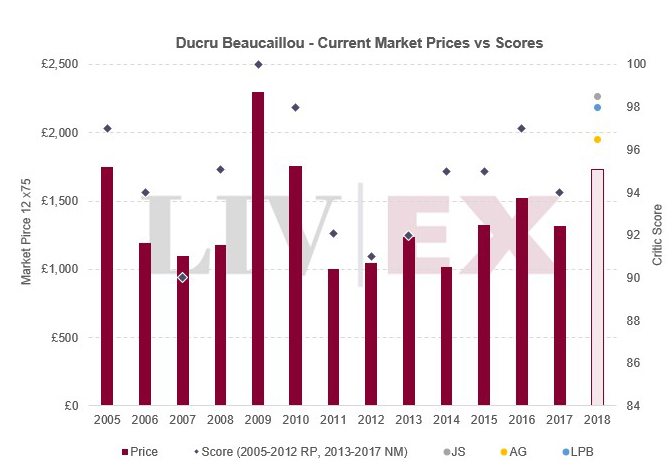 From this we can deduce that the Ducru 2018 is not unreasonably priced. It is certainly not a bargain, coming in at a mere £20 discount to the 98 point 2010, but at least the price doesn’t have you scratching your head. Two elements of this graph do that: the 2008 and the 2014. Especially the 2014. Both score 95 and are excellent wines, but 2014 has it over 2008 as to overall vintage score, by 93 to 91. Clearly the 2008 has 6 years more ageing with the improvement and reduction in availability that comes with that.

Amphora clients will now be wondering what our proprietary algorithm has to say about all this, containing as it does formulae to account for age and scarcity and so on, so here is the pictorial of that: We believe that notwithstanding the seeming torpor in the fine wine market at present there are always bargains around, indeed far more bargains are to be found at times such as this than when the market is off to the races, for obvious reasons. As you can see from the above graphic Ducru Beaucaillou 2014 heads the buy list from that chateau.

We have noted in recent weeks that investors like to be told when to sell. With reference to the above, we advocate purchases of the 2014 and, if you love that producer and want to spread the risk you could add the 2008; we would recommend that you hold on to the 2011 and 2012 if you own them in a portfolio, and would be sellers of the 2007 and 2009. Stale holders of original en primeur 2013 should sell those now too.