The Darling Buds of May

Well there’s been precious little sign of them as far as the fine wine market is concerned, indices limping along listlessly awaiting direction from an as yet uncooperative en primeur campaign. It does sometimes feel like Groundhog Day, each issue desperately examined, usually without success, for some evidence of value.

Take Lynch Bages, for example. Fabulous reviews but difficult to see how it’s not already in the price. With situations like this you can suggest that Lynch lovers might be buying because 2018 may turn out to be one of the best Lynch Bages of all time? There has never been a perfect scoring vintage, the closest being 1989 when Robert Parker gave it 99, and the Wine Advocate gives last year’s crop 96-98. 2016 scores 97+ which is also a very fine effort, and the Regional Vintage Score for Pauillac in 2016 was 98, so even connoisseurs might be happy just to acquire the 2016.

Another Fifth Growth punching above its weight in terms of quality is Pontet Canet. Having astonished the world with its 2009 and 2010 vintages both of which scored maximums – the first Fifth Growth ever to achieve that accolade – one feels that Pontet Canet is still “finding its investment feet”. By that we mean that the market is not quite sure how to price it.

The 1855 Classification system was based purely on price, and as far as its gradings are concerned is now somewhat anachronistic. Some of the producers in the lower tiers are making wines which are considerably better than their elevated counterparts. Indeed, when discussing fine wine investment the tendency is to aggregate all non-First Growths as “Superseconds”, because a Fifth Growth like Pontet Canet is now producing considerably better wines year in year out than a Second Growth like Rauzan-Gassies.

To our way of thinking, Pontet Canet 2018 is one of the few to emerge so far as priced-to-go. Although it is not as perfect as the 2009 and 2010s the majority of critics speak very highly of it and Wine Advocate sees it between 97-99, so it could be fabulous but might just be very good indeed. As such its offer price at £1,038 seems very reasonable.

Leoville Poyferre may also turn out to be a bargain at just over £800 but the critics are more split as far as it is concerned. If Suckling (97-98) is right it is cheap, if Perrotti Brown (94-96) then it is just about on the mark. Canon meanwhile looks unequivocally good. Canon, you will remember, shot to stardom by not only creating a perfect wine in 2015, but by pricing it generously. Even then its perfection was not universally acclaimed. Suckling gave it 100 and Neal Martin 98-100 when it went into barrel, but in bottle Perrotti-Brown scored it 96.

Notwithstanding, its en primeur price at £750 was alongside the secondary prices for the 2009 and 2010s, and its hint of perfection, if we may call it that, saw the price double and it now sits not far off £2,000. If only all the producers saw it this way! The current crop (the 2018) has scores of 98-99 from Suckling and 97-99 from Perrotti-Brown, and whilst Antonio Galloni is more miserly with an admittedly wide spread of 94-97 the offer price still looks attractive at £1,044.

Another curiosity of the current phase is the seeming malaise in the face of what ought to be a benign currency backdrop. Commentators in the past have noted that fine wine prices have often done well when Sterling has been in decline. This is because the secondary market is denominated in Sterling and so a weaker Pound makes the market cheaper for overseas investors.

We at Amphora are on record as recommending not to put too much emphasis onto this other than in the short term, when it can obviously make good prices even better for foreign buyers. Over time, however, the investment dynamics in the fine wine market stand up for themselves irrespective of exchange rates. That said, we fully understand the keenness of a foreign investor should he or she believe their home currency to be in perennial decline against Sterling (as some Indian clients do), as much as we might understand the reluctance of such a participant who might think their currency in permanent appreciation against Sterling.

Those commentators referred to above who seek to explain away the fine wine indices’ movements as simply a currency play might be interested in the graphs below. From November fine wine prices ought to have fallen, and from March they ought to have risen, as the Pound initially rose against the Euro, and then declined. These are quite substantial moves, by the way. 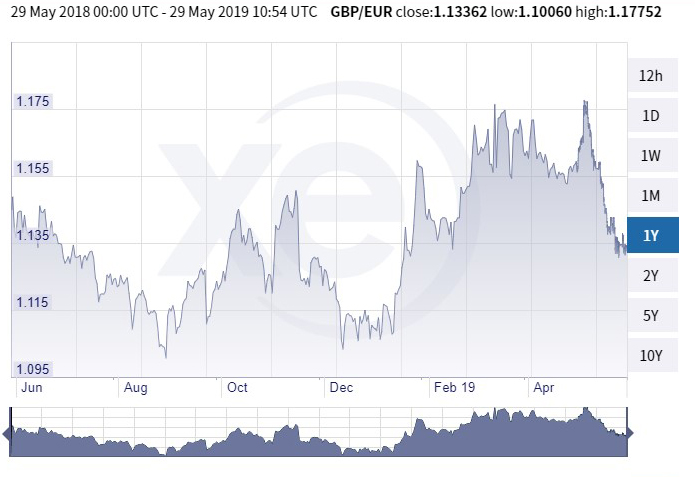 Yet here is the Liv-ex 1000 doing almost exactly the opposite.

In our view it pays to be aware of currency relationships, and there is an inevitable consequence of them on the cost of wines, and therefore the returns available. Investors should be aware of the potential alterations to the time frame of their investments that these fluctuations can cause, but we strongly suggest that fine wine investment is not just some rudimentary currency play.