We talked about the gold price a couple of weeks ago and sure enough it hopped up another leg to just shy of $1,450 before correcting gently. We wondered what this might augur and since there has been something of an escalation in verbals between the US and Iran in recent days, and one of the theoretical attractions of the yellow metal is its safe haven status in times of crisis, can we attribute the move to this?

In truth this “safe haven status” is just one of several attractions cited by gold market aficionados, others being its use as a hedge against inflation (or deflation!), interest rates falling, the US dollar weakening, and so on. Whilst this sort of speculation may pass the time in idle conversation it isn’t really that much help when it comes to investment strategy, largely because a mere glance at the long term price movement of gold reveals that the wait for performance is lengthy and comes with a sizeable opportunity cost.

We are beholden to FactSet for this chart illustration, should that last sentence leave any room for doubt: 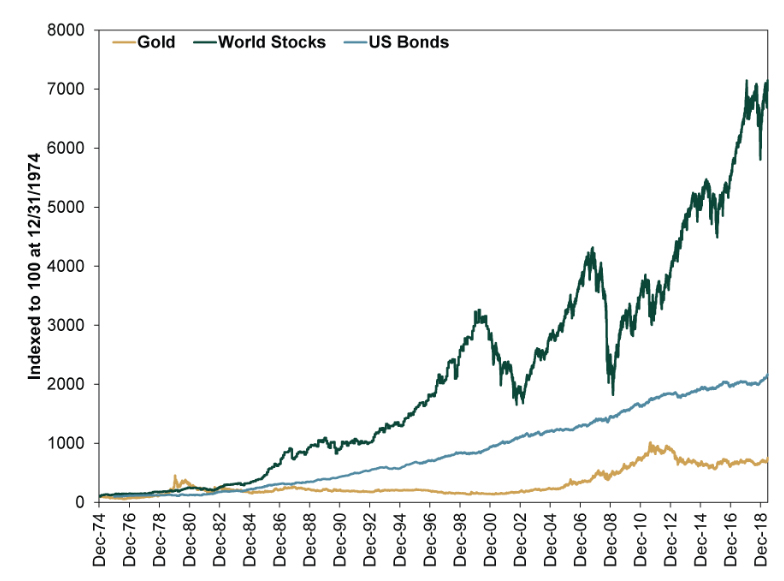 Meanwhile Bordeaux fine wine prices may just be bottoming after what can best be described as an indifferent start to the year. One of the beauties of this market place is its sectoral variety, and it is quite interesting to note what has been happening elsewhere whilst the Liv-ex-50 has been so introspective. Here are the Liv-ex 50 and Bordeaux 500 indices so we can put what follows into context: 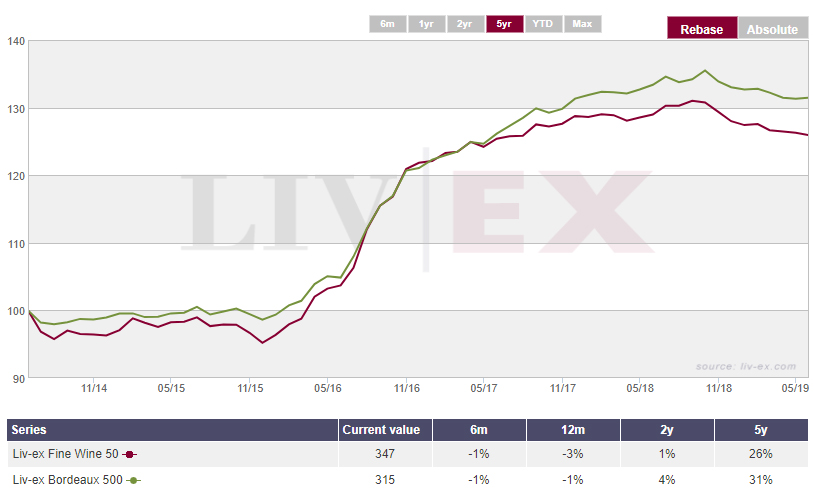 As we have come to learn, over the longer term the broader indices tend to win out. The Liv-ex 50, you will recall, comprises the last 10 trading vintages of the 5 First Growths, whilst the 500 just about covers the Bordeaux spectrum. In both cases, obviously, there was a consolidation both followed by, and following a substantial rise in prices.

The 2 questions arising from this are: what happens elsewhere whilst Bordeaux is consolidating: and when might we expect the consolidation to end? One easy question then, and one somewhat more taxing. 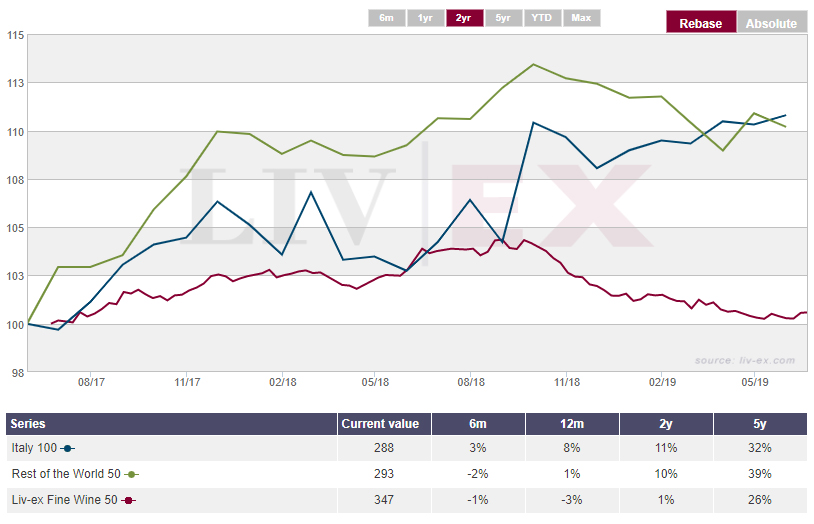 This 2-year chart captures the last part of the First Growth rally, and the consolidation thus far. Although both Italy and the Rest of the World have arrived at the same spot at the same time, they have done so by different routes. Both tried to leave Bordeaux behind in the last year of the rally, as prices peaked, but only the Rest of the World managed to maintain its distance, Italy coming back into line through most of 2018 before taking off again at the year end.

In the ideal world of investment which regrettably none of us inhabit, we would have switched out of our First Growths into the ROW in mid-2017, switched again into Italy towards the end of Q2 2018, and been primed for the switch back into First Growths whenever appropriate. So, wise guy, have we arrived at that moment?

Remember that after a period of sectoral outperformance you get a slowdown, and prices tend to emerge from a slump with a period of outperformance. It may come as a surprise having watched the inexorable rise of Burgundy prices in recent times to learn that Burgundy is the worst performing sub-sector of the Liv-ex 1000 over the last 6 months. Yet it is. Comfortably. Performing worse than anywhere on a 1 and 2 year view, however, is the Liv-ex 50.

Prices sometimes need an excuse to lurch ahead, sometimes not, but they seldom do if there is a whiff of bad news in the air. Now that the en primeur campaign has been and gone, the tension inherent in that process can fairly be said to have subsided. In Amphora’s humble opinion there were precious few bargains to be snapped up, but equally if the Liv-ex review of members’ price expectations is anything to go by the conclusion would be “moderate to fair”, in shipping forecast parlance.

Where there are bargains, however, is elsewhere in the Liv-ex 50. Scanning First Growth prices across the algorithm from vintages within that index we find that there are plenty of stand-out buys, all of them itching to outperform the broad market. 2014 features regularly, in fact everywhere bar Latour, who haven’t yet released from that year. If you want “prime real estate” then the 2009s and 2010s of both Lafite and Mouton Rothschild are at prices we feel sure are on the point of motoring ahead. 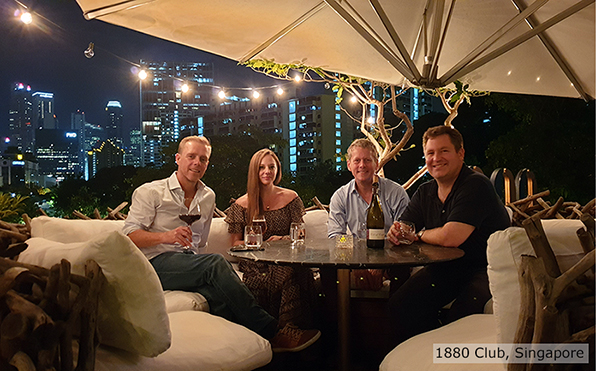 As we continue to expand our own footprint into South Asia and the Far East, (with 2 tastings in Singapore this week alone), we find a ready ear for better known Bordeaux names from investors new to this market-place. Whilst it is always easier to sell a market that is racing ahead because people hate to miss out, that is not usually the optimum route to investment success. Fine wine investing requires the long view, whilst being alert to the sectoral movements as they ebb and flow.

We think that now is a good time to be increasing weightings once again to some of the more recent vintages of those old Bordeaux left bank favourites.