Black Friday in the world of fine wine investments

Most people’s inboxes this week will be filling up with reminders about the unspeakable Black Friday frenzy whose argy-bargy will be populating the news screens at the end of the week as one black eye follows another. Unfortunately, we don’t have a Black Friday fine wine investment sale on! But we do have some interesting updates from the world of wine investment.

China has its own version of Black Friday, a rather more romantic “Singles’ Day” which takes place on the 11th November. 11/11 is a rather neat touch for a singles’ day, isn’t it?

Anyway, the reason I point this out is that on the most recent iteration of Chinese Singles’ Day earlier this month, a staggering US$17.8 billion was turned over, a figure apparently in excess of the total full-year e-sales forecast for no less a country than Brazil. Given that Brazil is the 5th most populous country in the world that’s quite a stat.

On the recent Amphora visit to Asia, we noted a dramatic increase in interest amongst Hong Kong fine wine merchants whose shelves have been emptying at a rate unseen since early 2011. The current uptick in Sterling doesn’t seem to have impacted this demand. It is as though the giant has emerged from its slumber.

One fine wine, in particular, has been in great demand and availability has now all but disappeared due to high demand from those looking to invest in fine wine. Petit Mouton 2010, has outperformed the other Second wines from both 2010 and 2009, so fine wine investors should keep an eye out for the availability of these vintages of all the Second wines.

A closer look at the pricing of Pomorols

We talked last week about anomalous pricing, and in the past have examined a lot of the Pomerols from 2008 and 1998. It is unusual to get two vintages which match each other but these two on the Right Bank were as near as dammit, both earning a glowing 96 points from fine wine critic Robert Parker.

It is interesting to note that whilst Pomerol achieved identical scores, St Emilion did not, which given their adjacent location is a good example of the variable results that can be created by the combination of climate and terroir. St Emilion scored 96 in 1998, like Pomerol, but only 92 in 2008.

When comparing the prices of individual Pomerol producers we would take account of the usual array of algorithmic variables in fine wine investment, and this would include the increasing scarcity of fine wines from older vintages. All things being equal, older fine wines are more expensive than younger ones for the simple reason that there are less of them about. The question is, how much more expensive should they be?

Three 2008 Pomerols have been underperforming of late, namely L’Eglise Clinet, Lafleur, and Le Pin. Of itself, this might create an opportunity, but let’s cross-check by pricing them against their sisters from 1998.

Le Pin may not have done much post-referendum, but as you can see it had a good start to the year. We first highlighted the 2008 and 1998 anomalies back in 2014, and the outperformance of the 2008 over two years really is significant. 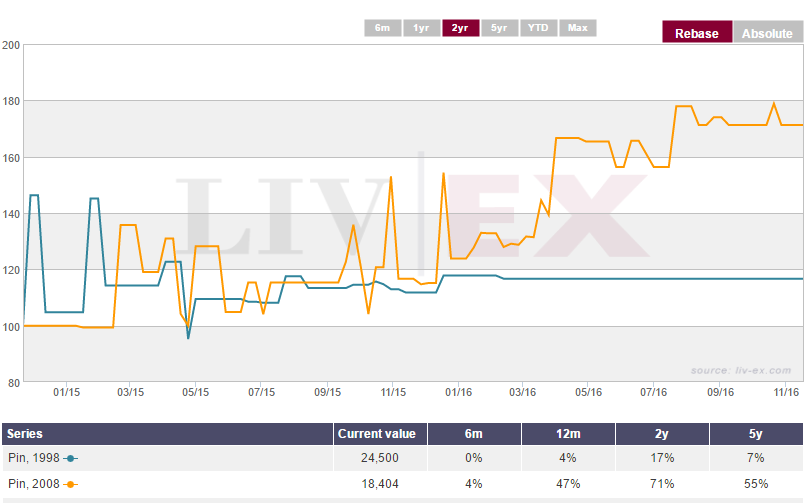 By contrast, the Lafleur 2008 fine wine has underperformed. Both of these fine wines scored 94 points, yet whilst the 1998 has appreciated 16% over two years, the 2008 is languishing at its post-correction lows. 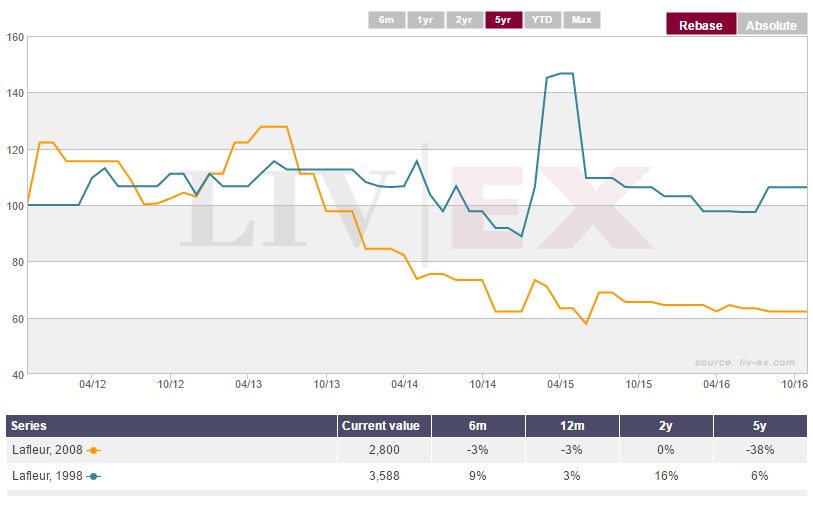 Let us look at L’Eglise Clinet: 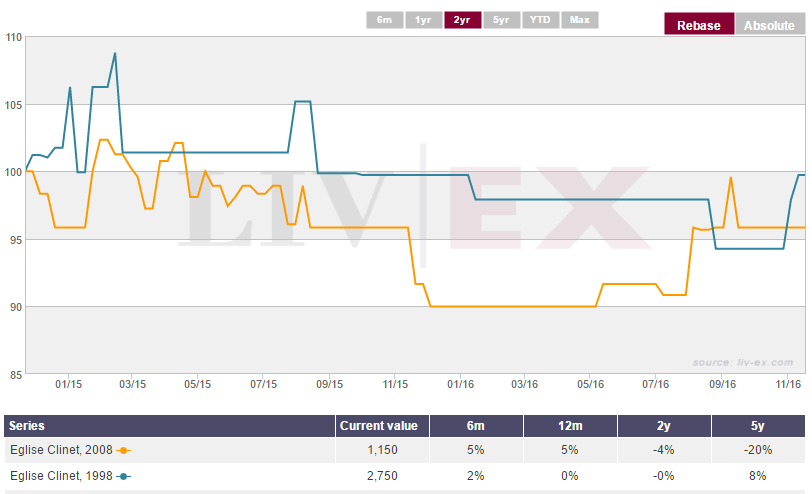 In this case, the 2008 has caught up to some degree over the last 12 months, but it is still a pretty feeble performance. The really significant thing here, though, is the price differential.

As we suggested earlier, older fine wines should, and do trade at a premium to younger fine wines, but today we are not going to debate exactly how large we believe that premium should be, leaving that for a later date. What we can see from the performance of the three fine wines in this brief study, is that Le Pin 2008 now trades at a 22% discount to the 2008, having narrowed that discount quite a lot over the last 18 months. Lafleur 2008 hasn’t squeezed the discount at all, which now sits at 25%.

What the critics say about Pomorol fine wines

This is what Robert Parker says about it:

“A remarkable wine in this vintage, … Opulent, expansive, and savoury, with a broad texture, a full-bodied mouthfeel, terrific purity and a layered finish, this is another big, massive wine that transcends the vintage character.”

Supporting the argument, L’Evangile and Vieux Chateau Certan 2008s have both hugely outperformed their 1998 counterparts over the last 6 months, whilst Trotanoy, in Amphora’s view, is another opportunity. The 2008 concedes a nudge to the 1998 (96+ vs 96) but at these levels, it is 40% cheaper, and should also be looked at very seriously by the fine wine investor.

Contact us to find out more about the fascinating world of fine wine investment.