From where you stand

There has been much comment in recent days about the 2009 vintage which, would you know it, has reached its 10th anniversary. Most observations are a reminder of how fabulous the vintage is and how euphoric most critics were when it went into barrel, and how prices have fared in the intervening period. Interesting a rehash of events as this might be, it is hardly news, and seems to us to miss the point.

There is a great line from medieval sleuth Cadfael played by the incomparable Derek Jacobi as he tries to pacify a family whose recent fortunes have taken a turn for the worse: “you move ahead from where you stand”. Recent events need not fore-ordain what happens next. Many coherent stock market commentators argue that past price movements have no predictive value.

At Amphora we strongly suggest that fine wine investors don’t get too hung up on their entry price. It is always a mistake to hold on to a wine, or a stock for that matter, because you bought it at a higher price, and the reason for that is that market conditions change. A set of circumstances which suggested that such and such a wine might be good value at point A might change to the degree that it is no longer good value at point B. That is what happens in a varied market place of prices with dynamic movement.

In consequence you have to look at the 2009s in accordance with their relative value right now, irrespective of the price at which they came to market. It is true that a poor “listing price” can take some time to unwind, but we are well past that point by now. The only true measures of whether or not you buy, sell or hold a 2009 are as to how they stack up against other vintages from the same producer, or the same vintage from a producer of equivalent status.

So, as they are in the news right now we have run our algorithmic slide-rule over a bunch of 2009s to see where exactly the bargains lie, and if you go alphabetically you don’t have to wait long before you find something winking at you. Alongside the 2010, Angelus 2009 is the best relative value vintage from that producer at these levels. Both are 99+ scorers so only exceeded by the 2005 which was upgraded from 98 points in 2015 at the 10 year retrospective. In price terms they also lag the Millennium vintage, and the 2012 which has a commemorative bottle.

Customarily amongst the Grands Cru Classe A and the First Growths the on-vintages will trade at premia over off-vintages at anywhere from 40% up to 100%, and this differential is far lower with Angelus, and with Pavie for that matter. This pair was elevated to Classe A only in 2012 so it may be that the market is taking a while to fully adjust, and if so Angelus 2009 would be a good selection as part of Right Bank exposure in a diversified portfolio, outperforming over time as the adjustment comes through.

Moving to the First Growth sector Lafite sticks out like a sore thumb. Here is the chart representation for the Lafite Rothschilds’ relative value: 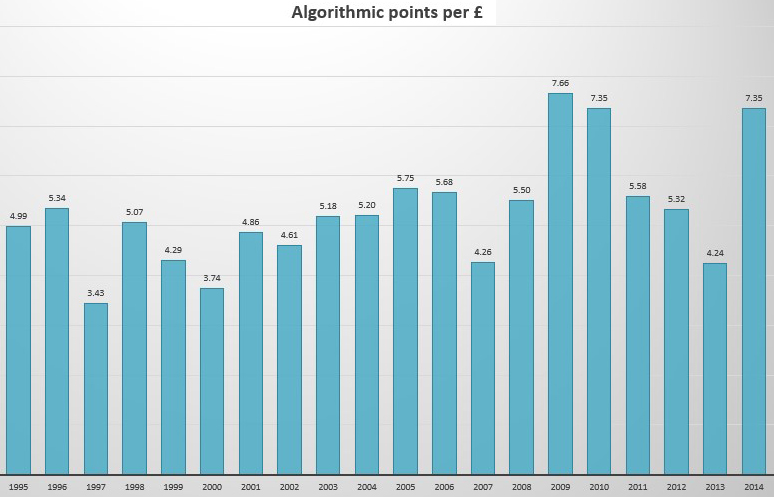 As mentioned above there is usually a healthy on-vintage premium at this end of the market, but not for Lafite. Despite its reputation and standing it has only one 100 pointer over the last 50 years, in 2003, so at 99+ the 2009 is better than all the rest, as Tina Turner might say. Considerably better than the 94 point 2007 which trades at a discount of a mere 12%. Remember that Robert Parker scored the 1996 vintage 100 but Neal Martin downgraded to 98 in October 2016.

Now it is possible that Lafite’s reputation is damaged beyond repair, ironically, by its earlier popularity, or by its ill-starred en primeur release price, but we think this highly unlikely. We believe, rather, that consumers will look back from some future date and reflect sadly that they had so long an opportunity to buy it at around the £7,500 mark, and recommend that current investors do not make that mistake.

If Lafite 2009 is too cheap the 2010 is not far behind, and we can see a similar effect in the Super Seconds with both Beychevelle and Duhart Milon. What is really interesting here is that these were also darlings of the pre 2011 Asia-inspired rally, Duhart ostensibly because of its Rothschild link and Beychevelle because its label resembles a Dragon boat.

Plausible as that explanation may be, it doesn’t square with the evidence:

It is quite possible that Duhart Milon 2009 doubled initially because in absolute price terms it was so inexpensive and you could argue cause and effect for its underperformance since then, but whilst it has certainly underperformed Beychevelle which experienced no significant hangover from the correction, it has actually outperformed both the Liv-ex 100 and Lafite 2009.

The point we would make is that the relative cheapness of both Beychevelle and Duhart Milon in the 2009 and 2010 vintages should be taken at face value. Do not avoid them because of any imaginary concerns, seductive or otherwise.

Elsewhere in the Super Second sector you can see large disparities between the 2009s and 2010s of both Ducru Beaucaillou and Leoville Poyferre, but the former vintages in both cases enjoy 100 point scores. A perfect score matters. So does the vintage quality. If you find cases where one or two of the cardinal price determinants is being ignored you are often on to something:

Buy the 2009 vintages of Lafite, Beychevelle, and Duhart Milon, not forgetting Angelus.