Blink and you’ll miss it

At a presentation on global investments recently the speaker posed this question of the audience: “who looks every day at what is going on in world stockmarkets?” A fair number of hands was raised. “Well do yourselves a favour”, he said. “Don’t!” His point was that there is an awful lot of short term noise which in the overall scheme of things is of minimal relevance. As Benjamin Graham once said: “In the short term the market is a voting machine, in the long term it is a weighing machine.”

Regular observers of the fine wine market could be forgiven for wishing for a bit more noise because even with the en primeur campaign in full sway there is not a lot to write home about. 2018 was an excellent vintage, without a doubt, but the better quality wines are being released at full prices. There are still a good few chateaux to release yet though, so we will be keeping a close eye.

The fact is that after a significant rise in prices, all market places need a period of rest, and in such periods of rest the newsflow can be thin. It is easy to forget just how well the fine wine market has done since the end of 2015, but a brief glance at the Liv-ex 100 and 1000 charts illustrates two very important points. 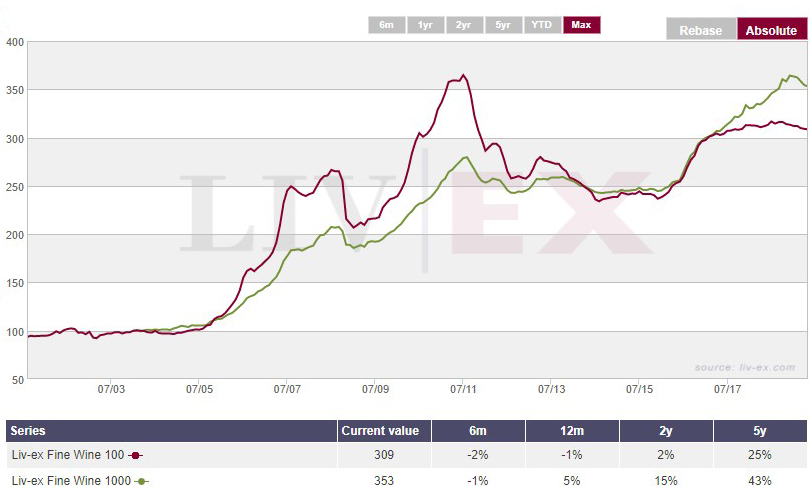 The first is the requirement for a period of quiet introspection after a significant rally. Nothing can go up in a straight line forever. This was a classic mistake from 2011, when hundreds of people piled into Bordeaux precisely because it had done so well. It’s a bit like when the taxi driver asks you what stocks you’re buying right now it’s more likely time to sell than to buy. In fact investment banks go to great lengths to study who is putting funds to work because the wrong type of buyer (the man in the street, as measured for example by unit trust funds flow) is often a key sell signal.

Most markets pause after a sizeable rally, and they need a stimulant to get going again. The key is to try and work out what that stimulant might be, and not to get sucked in by red herrings.

The second point has to do with polarisation. A single stock or wine purchase can do very well over the short term, but often pays for it over the long. Nosebleeds can accompany a stratospheric rise. By contrast diversified exposure through a range of wines can also tread water for a while, but is far more likely to perk up as a result of the rotation of interest within the market, which will settle somewhere within the portfolio at various points in the cycle.

In this chart you can see that the red line represents the narrow index, the green line the broad. Aesop was onto something with his tortoise and his hare.

Another point worth making, and this is peculiar to fine wine investing as opposed to the more mainstream, is that the market is evolving all the time. Wines which were barely traded 10 years ago now occupy important places in the firmament. Take Napa Valley, for example. The Liv-ex has now created a California sub-index to acknowledge the emerging importance of this region, and here is its relative performance over the last 5 years:

Amphora has been a big supporter of wines from Opus One and Dominus over that period and it has repaid the investment in large measure. Then of course there is Burgundy. Having underperformed Bordeaux for at least a decade up until the 2011 correction that sub-index has delighted followers consistently ever since: 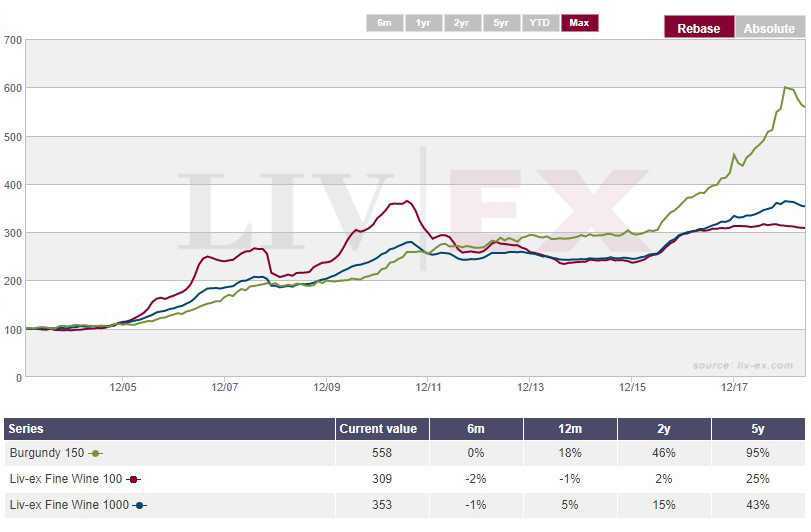 The performance of that Burgundy sub-index has been very DRC-centric and regular readers will know of our caution in that specific direction, and keenness to explore the wider reaches of the sector, but Burgundy has become the most discussed part of the market over the last few years.

Obviously collectors were buying the DRC family 10 years ago but it was at much more reasonable prices, indeed one of the reasons for the headlines has been the regular records broken for prices paid at auctions worldwide. As you can see from the tail end of the green line in the chart above, even Burgundy is prone to a pause. We shall see if it turns into a correction or merely a consolidation.

The fact that we propose fine wine as a longer term investment ought to mean that market participants are used to these periods of somnolence. That doesn’t mean that bargains evaporate, of course, because when consolidations set in the volume of trades can dry up somewhat, and at such moments vendors looking for a quick sale tend to take the bids on offer. As ever we remain on the lookout for such opportunities, because being alert when things are dull is often a passport to enhanced returns.