There’s been a fair amount of comment on the movement in the gold price recently, in so far as it has bounced quite sharply off £1,275 and has paused (either to retreat or advance?) at around £1,340. This is customarily considered to reflect a panic move into “safe” assets, but you can hardly say anything particularly new and alarming is hitting the fan, given that the S&P is also up a similar extent over the last month. There is no obvious “risk off” move here. 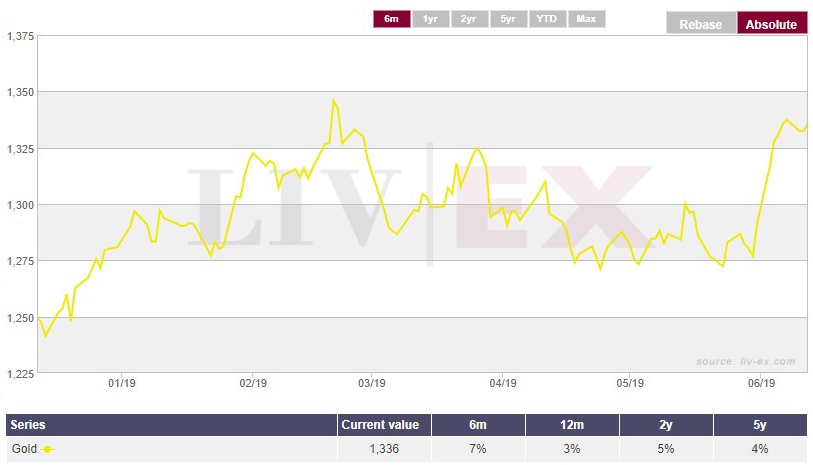 Amphora is also on record as suggesting that there is often much more afoot in the gold market than global uncertainty, indeed we have posited in the past that given the increasing importance of the Chinese and Indian economies, and given their propensity to buy gold for cultural and ornamental reasons, a key price driver is as likely to be consumption as investment. Either way, what might this bode? Might such a switch into physical assets help the market for fine wine?

As ever, you can’t take short term moves out of context. The gold price has performed poorly against other financial assets for the last five years, an interesting time frame because it shows the Liv-ex 1000 and the S&P more or less in lock step. It is also a reasonable term against which to expect a good return from the fine wine market. The graph below illustrates the higher volatility of the equity market, which is good or bad depending on your inherent level of stress. 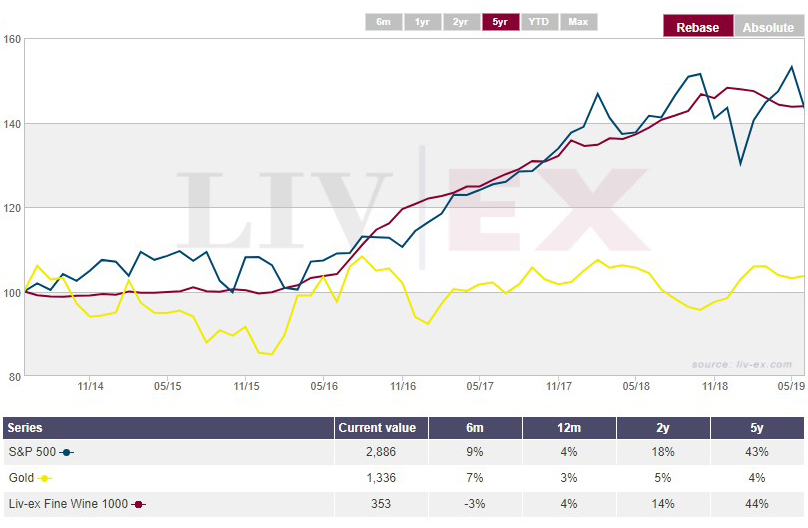 Pan further out of course and a different picture emerges: 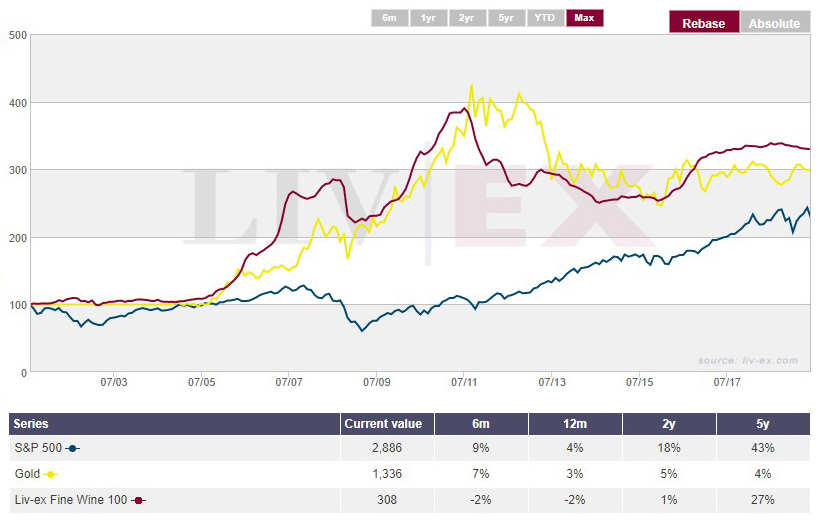 Just to be clear, this graph shows the Liv-ex 100 rather than the 1000 because the constituents of the 100 are so much more in play dating back beyond 2011, but it is apparent that something broadly similar is going on with wine and gold, and if it is neither that they are physical assets (both are), nor that they offer a port in a storm of uncertainty (a view which has its adherents), nor that they are avidly consumed in the developing economies (almost unarguable), then we invite suggestions for the explanation.

There are many obvious differences, of course, not least that one market is ginormous and the other tiny, one is binary and the other multi-faceted, one prone to increasing scarcity and the other to inexhaustability, but that similarity of long term performance demands that we pay attention to it and try and understand what factors are at play. Any examination that aids understanding can only help in the end, is our view! Short term gold has bounced quite vigorously and we are as ever on the lookout for implications.

Meanwhile the First Growths are showing a leg in the EP campaign at long last, indeed we now await only Lafite. Haut Brion have unfortunately left little to the imagination. Why the producers do this is a constant debate and for now we are going to restrict ourselves to observation rather than examination.

Illness prevented Neal Martin from tasting the en primeurs this year, and we wish him well. LPB thinks the Haut Brion 2018 is worth (97-99)+. She clearly favours Haut Brion and had she thought it worthy of 98-100 she would have said so. Now, here’s the rub. Traditionally en primeur purchases came at a discount because the buyer is funding the producer for a couple of years. This has since 2009/2010 ceased to be quite the gig, as they have tried to extract every last bean on release.

This gives rise to a further proposition with which we would like to politely take issue. Some commentators seem to believe that the producers are releasing less to market to try and encourage the idea of scarcity. This is bonkers. As Latour have amply demonstrated, no-one thinks there is going to be a shortage of anything whist there are endless cases holed up in the chateaux, yet to be released. Latour even think “ex-chateau stock” is worth a premium which just goes to show how much parallel-universe-thinking goes on in Bordeaux.